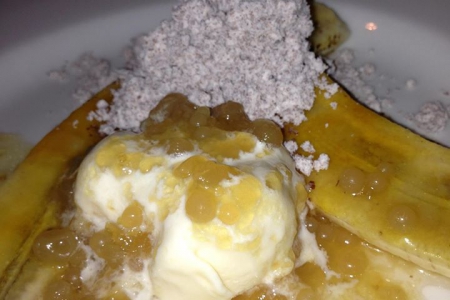 This may not be a recipe for the faint of heart, occasional-make-a-casserole type chef, but as you asked for it Cameo Heights Mansion Innkeeper Alan persuaded their Chef to give it out!

Bananas
Remove skin and cut in half, long way. Sprinkle with sugar and caramelize with a culinary torch.

Apple Bourbon Pearls
4 cups of canola oil (left in freezer until very cold but not solid (about 40 minutes)
100 grams Apple juice
50 grams of bourbon
50 grams Torani vanilla syrup
3 grams Agar Agar (the gel so nice they named it twice, sort of like Walla Walla)
In a small sauce pan, bring all ingredients to a simmer for 2 minutes to hydrate agar agar. Turn off heat. Allow mixture to cool for 5 minutes. Fill a syringe with hot liquid and drip one drop at a time into the cold canola oil. Repeat process until all hot liquid is dripped into oil. Strain the resulting beads (pearls). Reserve the oil for another use.
Rinse bourbon-apple beads in cold running water.